ASQ has been at the forefront of the quality movement for more than 65 years. 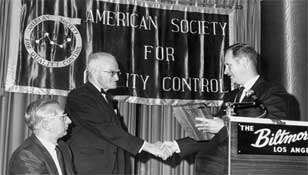 Headquartered in Milwaukee, ASQ traces its beginnings to the end of World War II, as quality experts and manufacturers sought ways to sustain the many quality-improvement techniques used during wartime. ASQ has played a crucial role in upholding these standards from the past while, at the same time, championing continued innovation in the field of quality.

By the end of the 1970s, the principles of quality had greatly influenced manufacturing and other industrial processes, by focusing attention on how products and services could define and meet technical specifications. Businesses typically established a quality-control department to ensure specifications were met.

In the 1980s, ASQ members began to see how quality could be applied beyond the world of manufacturing. Quality, they realized, could make a difference in any organization and touch every person in it. Quality began to blossom into a much broader discipline aimed at leading, inspiring, and managing a broad range of businesses and activities, always with a focus on excellence.

Today, ASQ has become a global organization, with members in more than 130 countries. ASQ now has service centers in Mexico, China, and India, and has established strategic alliances with numerous organizations to promote ASQ products and training. A rich history and bright future; we are ASQ, the Global Voice of Quality™.

ASQC's Code of Ethics establishes responsibilities and standards by which members should conduct their activities and business.

First Shewhart Medal is awarded to Leslie Simon, director of the Ballistics Research Laboratory in Maryland.

Headquarters operations are consolidated in Milwaukee; a full-time administrative secretary is employed to handle expanding operations. The International Chapter is formed to provide services to members abroad.

The Education and Training Institute Board is formed with a national program focusing on management seminars and quality control engineering courses.

October is designated National Quality Month by Congress to emphasize to business leaders that quality is essential to U.S. preeminence in products and services.

The Malcolm Baldrige National Quality Award is established, with ASQC as a co-administrator.

The Registrar Accreditation Board is founded as an independent organization to accredit third-party ISO 9000 registrars.

ASQC drops "Control" from its name, becomes ASQ and formally adopts a new mission to promote performance excellence in a broad range of organizations and activities worldwide.

ASQ China is launched. ASQ leads the charge that culminates with President Bush signing into law the bill to create a nonprofit category of the Baldrige Award. ASQ’s board of directors voted to change the name of Region 4 to ASQ Canada. ASQ’s International Six Sigma Program expands into Latin America with Spanish-language Six Sigma courses offered through local training partners. ASQ Costa Rica becomes the first International Member Unit (equivalent to a Section) outside of North America.

ASQ launches an initiative to promote the Economic Case for Quality. ASQ is named secretariat for the US TAG to the ISO Committee on Social Responsibility. ASQ successfully campaigns to have the Baldrige Award expanded to cover the nonprofit sector. ASQ forms 11 new networks and communities of practice to expand networking opportunities for individuals with a wide range of interests. ASQ hosts expert panel discussion on quality and healthcare for members of Congress.

World Quality Month was created to reignite attention once generated in the 1980s by National Quality Month in the U.S. and to create a united, global forum for the people and organizations that have celebrated World Quality Days in November to come together and raise their voices for quality.

ASQ releases the Global State of Quality: Discoveries Report. This groundbreaking initiative identifies quality successes and opportunities from around the world. This unprecedented worldwide research took nearly a year and a half to complete, with more than 2,000 survey responses from organizations in more than 22 countries.