what is a Histogram?

A frequency distribution shows how often each different value in a set of data occurs. A histogram is the most commonly used graph to show frequency distributions. It looks very much like a bar chart, but there are important differences between them. This helpful data collection and analysis tool is considered one of the seven basic quality tools.

When to Use a Histogram

Use a histogram when: 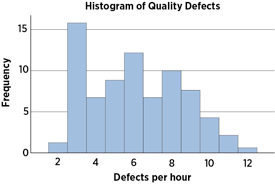 How to Create a Histogram

Histogram template (Excel) Analyze the frequency distribution of up to 200 data points using this simple, but powerful, histogram generating tool.

Check sheet template (Excel) Analyze the number of defects for each day of the week. Start by tracking the defects on the check sheet. The tool will create a histogram using the data you enter.

Typical Histogram Shapes and What They Mean

It's important to note that "normal" refers to the typical distribution for a particular process. For example, many processes have a natural limit on one side and will produce skewed distributions. This is normal—meaning typical—for those processes, even if the distribution isn’t considered "normal."

The skewed distribution is asymmetrical because a natural limit prevents outcomes on one side. The distribution’s peak is off center toward the limit and a tail stretches away from it. For example, a distribution of analyses of a very pure product would be skewed, because the product cannot be more than 100 percent pure. Other examples of natural limits are holes that cannot be smaller than the diameter of the drill bit or call-handling times that cannot be less than zero. These distributions are called right- or left-skewed according to the direction of the tail.

The plateau might be called a “multimodal distribution.” Several processes with normal distributions are combined. Because there are many peaks close together, the top of the distribution resembles a plateau.

The edge peak distribution looks like the normal distribution except that it has a large peak at one tail. Usually this is caused by faulty construction of the histogram, with data lumped together into a group labeled “greater than.”

In a comb distribution, the bars are alternately tall and short. This distribution often results from rounded-off data and/or an incorrectly constructed histogram. For example, temperature data rounded off to the nearest 0.2 degree would show a comb shape if the bar width for the histogram were 0.1 degree.