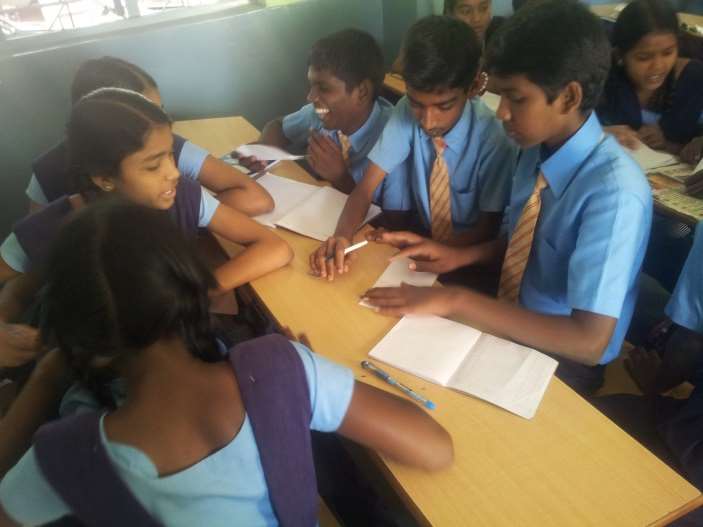 8th- and 9th-grade students at a government school in Bangalore, India, participate in a lean training exercise using origami

Providing hands-on experiences to students is essential for lean workshops. But, most of the time, availability of a problem is a hassle, and even if there is one, it’s difficult to engage a large audience in a single workshop, especially in schools and colleges.

Origami, the Japanese art of paper folding, can be used to provide students with a hands-on experience for understanding process thinking and process steps. The activity has the characteristics of a manufacturing process, and the end result of using this technique can be effective at conveying quality tools and concepts for all age groups.

About the Origami Lean Exercise

Sunil Kaushik, a freelance lean and Six Sigma trainer, has conducted lean training sessions since 2011 for students aged 10 to 23 and for professionals of all levels of experience in quality and project management. 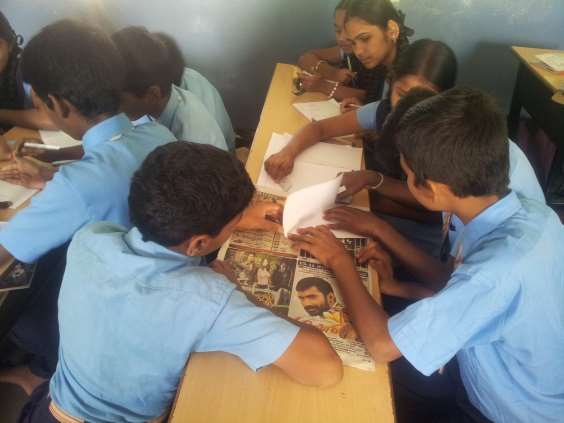 His problem for the past three years has been finding a cost-effective way to engage teenage students in lean training so they experience a real-life quality deployment project. The students, and even their classroom teachers, found traditional approaches to lean training to be boring, as all the sessions were theoretical with few group activities. The students were also a bit young to appreciate the concepts of waste elimination, and because of this, the assessment results at the end of the training were poor (an average score of 55 percent).

Poor assessment scores led to the dissatisfaction of the school staff as they did not see value in the course, despite it being offered for free at times. Sunil had to develop a more effective strategy to keep students engaged, perhaps through a live project. He thought of simple IT projects, but many government schools and colleges in Bangalore, India, do not have computers.

This is when Sunil noticed his Japanese friend Yuka, now his wife, teaching “origami frog” to other children. When Sunil tried to make a frog, it was not as easy as it looked. Origami has a level of complexity similar to most of the quality projects he had encountered in manufacturing and business environments, and it only requires a few old newspapers that are converted to beautiful art by the end of the day.

Origami is derived from the Japanese words ori ("folding") and kami ("paper"). The goal is to use only folding and sculpting techniques, no cutting or gluing, to create a recognizable shape from a flat sheet of paper. Interestingly, origami has all the properties and constraints that any process improvement project would have, like process steps, lead time, etc., and the only raw material needed is paper, plus a few origami designs.

Wikipedia offers a basic introduction to origami, while other non-ASQ affiliated websites provide step-by-step instructions, including the following:

Sunil first tested using origami as a training tool in June 2013 in a government school with ninth-grade students, 14 to 15 years of age. With 36 students, six teams of six people were formed (Teams A, B, C, D, E, and F), and an old newspaper was supplied to each team. The assignment involved teams using a procedure sheet to make an origami boat to familiarize themselves with the process. Most teams completed a boat in 10 minutes, and the initial project also worked as a good icebreaker activity.

The students were told a customer was looking to buy paper boats at a cost of $10 per boat, and each piece of paper would cost $1. The students quickly calculated they could make a profit of $9 per boat. They were then told the customer needs a total of 10 boats and would buy randomly from any teams who could provide boats first. Every team member in each of the six teams began building, and within 10 minutes, four teams supplied two boats each, and two teams supplied just one. The teams were asked to calculate how many boats they had finished that were not sold to the customer and were asked to calculate the loss by multiplying the number by $9.

This is how the scoreboard looked:

This was the right time to explain about the first type of waste, overproduction, as well as its effects, and how to overcome such issues through single-piece flow.

The teams were given a second procedure sheet for building 10 origami pianos, along with specifications for the amount of time to be taken at each process step. The students were given five minutes to think of an execution plan before beginning.

This time, the team members decided among themselves who would complete each step and who would record the time after completion of each process step number. Four teams provided two pianos each, and two teams supplied one. The scoreboard is provided below:

The kids could now easily appreciate why single-piece flow is an excellent method. An interesting observation is that once Team D learned they would not be able to produce a second piano faster than the other teams, they stopped, to avoid the loss, whereas Team A went ahead and took the hit.

The trainer then drew all the process steps on the blackboard, asking each team to read out the time it took to complete each process step. Through this process, the students were introduced to the concepts of lead time and wait time. Every team had a higher lead time at the first process (i.e., cutting the paper into a proper square) and that way they were introduced to the term bottleneck.

By extrapolating similar production tasks of origami exercises, the students were introduced to concepts including value stream mapping, kaizen, and mistake proofing. The participants even started generating process improvement ideas, such as using a scale to cut the paper or level loading the process steps where one team member completes only one fold.

By the end of the four-hour workshop, the students had completed 10 origami exercises and knew most of the lean wastes and tools they were expected to learn. Surprisingly, though, 29 of the 36 students had scored higher than 90 percent on the final assessment, while the remaining students all scored above 73 percent. The assessment test consisted of 30 questions to be answered in 30 minutes, and all the questions were scenario-driven, asking the students to identify the kind of waste in a given scenario or to choose an appropriate lean tool. 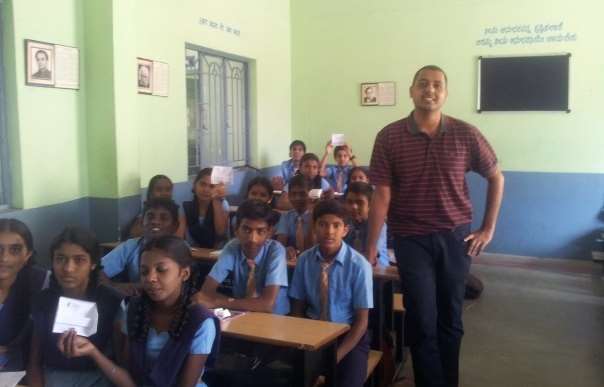 Sunil Kaushik poses with his students following an origami exercise

Learning quality through art works for all age groups, and this technique can be used to teach a variety of concepts, from lean basics to advanced Six Sigma and statistical tools. Sunil has conducted similar workshops in two more government schools, calling the program an Art Factory Setup Project rather than lean training to help create excitement. Students up to the age of 13 are provided with origami exercises and asked to manufacture the outputs with utmost efficiency by identifying wastes and driving lean independently. The average assessment score has been 90 percent. Sunil is in the process of working with arts teachers to conduct the program throughout the year as part of the arts club, receiving overwhelming support.

Sunil also conducted a three-day Six Sigma Black Belt training/workshop in July 2014 focused on setting up an origami factory. There were 14 attendees between 29 and 47 years of age from various backgrounds, and 11 were already Green Belt certified.

He used 12 origami activities to train the participants in the define, measure, analyze, improve, and control (DMAIC) and design for Six Sigma (DFSS) methodologies. The end result was astonishing, with a 38 percent improvement in assessment results and a 72 percent increase in engagement level, measured based on the questions asked or answered by the participants.

The workshop’s total investment was $3 to procure some used newspapers.

Sunil Kaushik started his career with GE Aviation and has nine years of quality and supply chain experience. He currently works with Cognizant Technology Services and is also a freelance project management, lean, and Six Sigma coach. He has a master's degree in nuclear physics and is also PMP, ASQ CSSBB, SPSM, and CPSCM certified.